You Are What You Eat (A Blog Action Day Post) 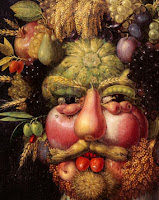 Mundane details ground a story, making it feel real and vivid.  Food is one of the most versatile and fun of these mundane details to include.  Here are a few things that descriptions of food can accomplish in your story:

I recently came across a passage in Suzanne Collins' dystopian novel The Hunger Games that accomplishes a lot of these things all at once.  Katniss, a girl who's fed her family by hunting and gathering since she was twelve, has just gotten to the wealthy Capital where she will be forced to take part in a reality tv show where the teenage contestants must kill each other until only one is left standing.  At her first meeting with her costume designer, Cinna:


He pushes a button on the side of the table.  The top splits and from below rises a second table that holds our lunch.  Chicken and chunks of oranges cooked in a creamy sauce laid on a bed of pearly white grain, tiny green peas and onions, rolls shaped like flowers, and for dessert, a pudding the color of honey.

I try to imagine assembling this meal myself back home.  Chickens are too expensive, but I could make due with wild turkey.  I'd need to shoot a second turkey to trade for an orange.  Goat's milk would have to substitute for cream.  We can grow peas in the garden.  I'd have to get wild onions from the woods.  I don't recognize the grain, our own...cooks down to an unattractive brown mush.  Fancy rolls would mean another trade with the baker, perhaps for two or three squirrels.  As for the pudding, I can't even guess what's in it.  Days of hunting and gathering for this one meal and even then it would be a poor substitution for the Capitol version.

What must it be like, I wonder, to live in a world where food appears at the press of a button?  How would I spend the hours I now commit to combing the woods for sustenance if it were so easy to come by? What do they do all day, these people in the Capitol, besides decorating their bodies and waiting around for a new shipment of tributes to roll in and die for their entertainment?

I look up and find Cinna's eyes trained on mine.  "How despicable we must seem to you," he says.

In just this page, the author tells you that Katniss is capable, resourceful, and, while possibly underfed, must be physically tough.  She's also observant and not at all taken in by the Capital's show of riches.  While Katniss understands exactly where her food comes from, the people of the Capital prefer to have it rise clean, pretty, and fully-made from the table itself.  By serving her such a fine meal, the Capital is indicating that Katniss has achieved a certain status (for now, anyway), but is also lording its wealth over her.  Since Cinna is the one who presses the button, he is the one in control of this meal and this meeting.  But we also see that Cinna has been observing Katniss, and that he reaches out to her over this meal that both of them understand is the result of, essentially, slave labor.  For the people of the Capital, food is just another form of lavish entertainment, but for Katniss it has meant (and will mean) the difference between life and death.

If you have a story going, collect all of your major characters around a meal.  Who cooks?  Where does the food come from?  How do the other characters like the food, or feel about its origins?  Who goes back for seconds and thirds?  Do the characters share freely or hoard?  What does food mean to them: survival, entertainment, comfort, fellowship?  Has anyone come to the table really hungry?